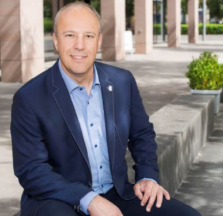 Welcome to our homepage!

Our renowned spa town is situated in the picturesque Nagold valley adjoining the northern Black Forest. It offers people an attractive living and recreational experience. Numerous cultural offers as well as the lively club life provide variety in our spa and parts of the town. You can find all you need to know about our associations, churches and politics, various institutions and our events here. Of course, my staff and I are available to clarify any personal concerns by phone or in person. Have fun exploring Bad Liebenzell.

New construction of the upper arch bridge in the spa gardens

Following demolition work in January, the municipal council awarded contracts for the replacement superstructure and structural steel works at its meeting held on March 23, 2021. Etzel Bau from Bad Wildbad was commissioned to carry out the solid construction work at a bid price of around 48,000 euros.

END_OF_DOCUMENT_TOKEN_TO_BE_REPLACED

“Wasenäcker” development plan in the district of Möttlingen was approved in draft form.

The municipal council approved the "Wasenäcker" draft plan at the meeting held on March 23  this year. The aim is to create further living space in order to be able to meet the constant, high demand. On the northern edge of the Möttlingen district, for example, an area that is currently partially developed is to be developed as building land in an attractive steep location.

END_OF_DOCUMENT_TOKEN_TO_BE_REPLACED

The post office in Bad Liebenzell has opened its doors again.

After a long closure, the town centre finally got its post office back. In a letter dated March 17, 2021, Deutsche Post AG, with its head office in Stuttgart, Germany, announced that the post office would reopen on Monday, March 29, 2021, thereby restoring postal service to the public.

The municipal council overwhelmingly approved the 2021 municipal budget of approximately 24,265 million euros at its meeting that was held on March 23, 2021.

END_OF_DOCUMENT_TOKEN_TO_BE_REPLACED

The municipal council has set Sunday the 17th of October, 2021 as the date for voting. A possible run-off election is set for Sunday the 7th of November, 2021.

The municipal council discussed the mayoral election during a session on March 2nd of this year. The Mayor’s term expires on 01/01/2022.
The administration proposed Sunday the 17th of October, 2021 as election day and the 7th of November, 2021 for a possible run-off election. This proposal was also confirmed by the board.